HOW DOES A PRONG COLLAR WORK EXACTLY? 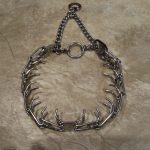 If properly fitted, the prong collar is designed to give an evenly applied correction. As the dog experiences a correction, pressure from the individual prongs on the collar is evenly applied to the dog. The handler releases the pressure the instant the command is executed. This training tool is meant as a momentary correction. Pressure on. Pressure off. For example: the momentary pressure goes on when the dog chooses to walk out of the “heel” position. Pressure is released the instant the dog returns to the “heel” position. The duration of a correction is typically one second or less. The idea is to get the dog’s attention and calmly move on.

The virtue of a prong collar (again, when properly fitted) is that pressure during a correction is evenly applied. Which is different from many styles of training collars such as flat collars, metal training collars (also known as choke chains), martingale collars (commonly used in dog shelters), and nylon dominant dog collars. When a correction is not applied in time before the dog exits the “heel” position, the handler ends up inadvertently choking the dog as the dog pulls in front of the handler. When not properly used, these various other training collars, can cause the dog to not only experience a choking sensation, but uneven pressure is applied to its neck. From my perspective, I see the choking dog at the end of the leash in front of the handler, as operating in a state of confused adrenaline.

WHEN TRAINING TOOLS CAUSE HARM…

Like with any tool, when it is not used properly, it can be ineffective or even cause harm. While I am familiar with the horror stories of neglect, where people say prong collars can become embedded into the dog’s neck, I have also heard of similar stories regarding flat nylon collars and metal training collars. I highly recommend removing the training collar when the dog is resting in its crate and playing with other dogs. It is also important to replace any training collar if the dog has outgrown the collar, or the collar is worn, rusted, or shows any other sign of deterioration.

Using these training collars effectively is possible. Obtaining training to use a tool is a reasonable situation and absolutely nothing to be embarrassed about. If one training tool fails to work with either you or your dog, another tool will likely work. Never give up! I have used at least three different training tools on Kato until we arrived at the tool which worked best for both of us.

HOW TO PUT ON A PRONG COLLAR 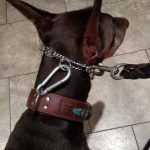 If the prong collar is too loose it can sag around the dog’s shoulders, which is ineffective when making a correction. Instead of an effective correction of pressure and release, the prongs rest into the dog’s shoulders contributing to constant state of correction (pressure). Being constantly corrected is confusing to the dog and will almost certainly slow the progress of any obedience training regimen. The key to good obedience training is to communicate clearly to the dog as to how their behavior can turn the pressure both on and off. 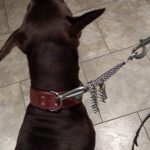 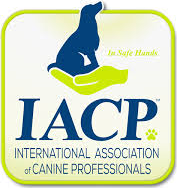 The chase is on this morning. (Sadie, Stevie, and Murphy) ... See MoreSee Less

Share on FacebookShare on TwitterShare on Linked InShare by Email

Why did you wake me up? Now I have to move to papa’s spot on the loveseat.

Here is the after-effect for Murphy. He came home and claimed mama’s chair while she was in the shower!

Welcome Stevie to our board and train program. ... See MoreSee Less

Share on FacebookShare on TwitterShare on Linked InShare by Email